In awe of the Sydney S.T.A.R.S

Five years ago, a team of Australian trail runners stayed at Newton Grange to take part in the first ever Oxfam Trailtrekker -   a 100km route on foot from Skipton through the Yorkshire Dales, to be completed in teams of four in less than 30 hours.  They won.  In a time of 13 hours 26 minutes. Wow. And at the start of the 2013 Oxfam Trailtrekker the Sydney S.T.A.R.S remained the course record holders and the team to beat.

So we entered.  And this year, on 1st June 2013, the Oxfam Trailtrekker course record was beaten by an incredible 26 minutes.

But there the similarity ends.  Our team, "The Route Marchers" were simply taking part.  Taking part to see if we could complete the distance and finish together as a team of four.  I'm delighted to say that we did.  Crossing the finish line in just over twice the time of the Sydney S.T.A.R.S in 2009, we managed to run the last few strides to finish 27 hours after we had started the day before.

What an adventure it had been!

This is our story.

Gathered at Aireville School in Skipton early on Saturday morning for the 6am start we were thankful the sun was up and it was a fine and sunny day. 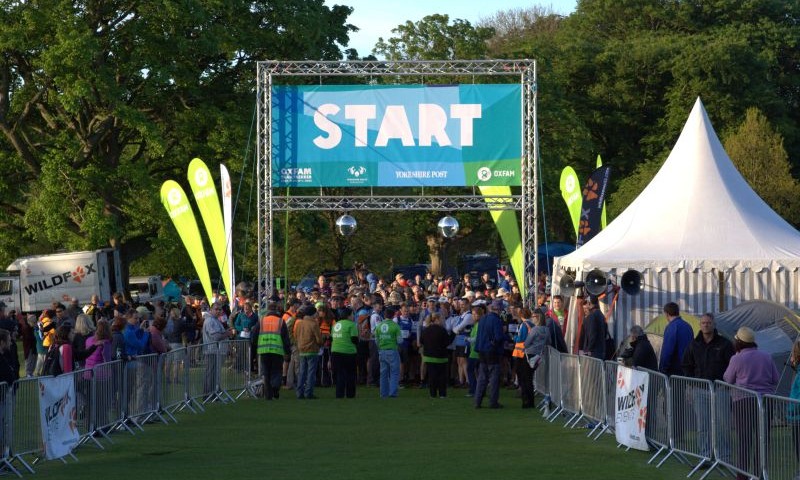 We set off in the crowds along the Leeds Liverpool Canal, with friendly waves from my husband Rob at the canal by Niffany Farm and on the bridge in Gargrave to cheer us along. 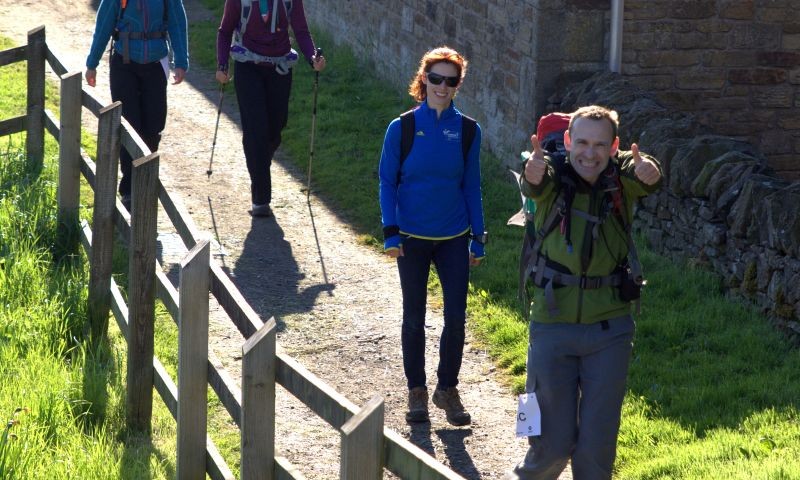 It was the beginning of a fantastic day and night of support from our lovely and generous spirited support team.

Checkpoint 1, Malham.  It was just after 9.30am.  A carnival atmosphere and inviting collection of goodies to eat from a comfortable deck chair.  Already 4.5 hours since breakfast and ham sandwiches were a treat. 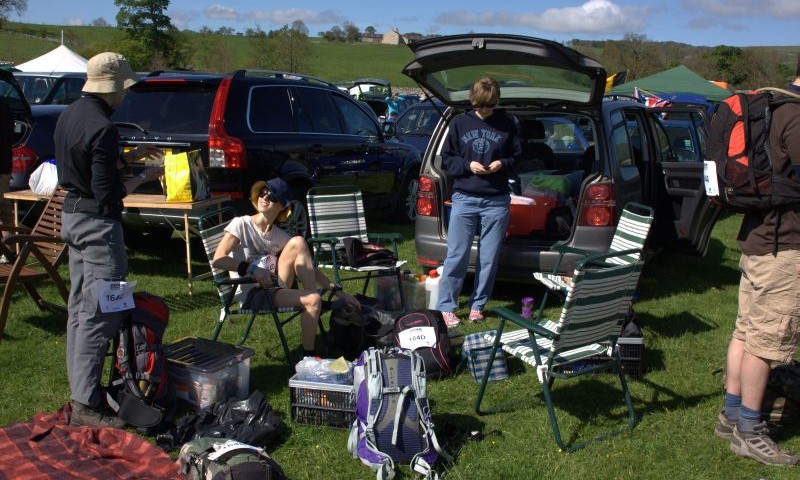 Refuelled and ready to go we continued on to Malham Cove, climbing the steps to the familiar limestone pavement. 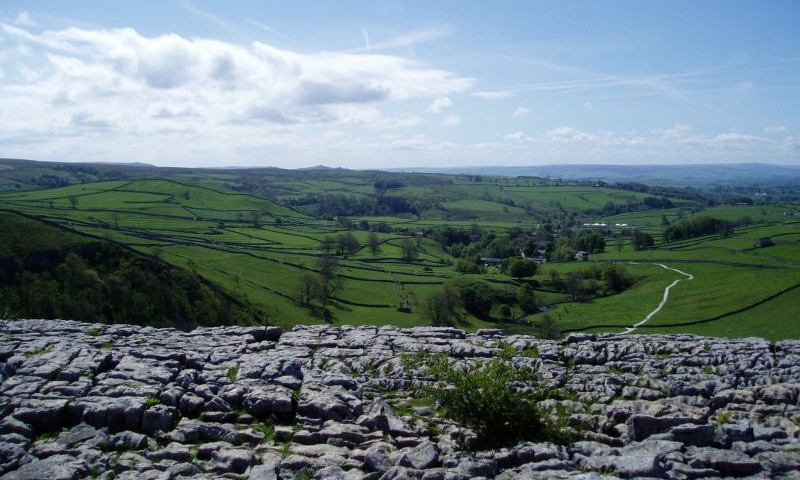 I loved the fact that I had been able to try out different sections of the route in the weeks beforehand, helping me to visualise it in sections and to be able to take one stage at a time.

Before our ascent of Fountains Fell, Rob and Annabel had walked out to meet us, a nice surprise as we hadn't expected to see them. 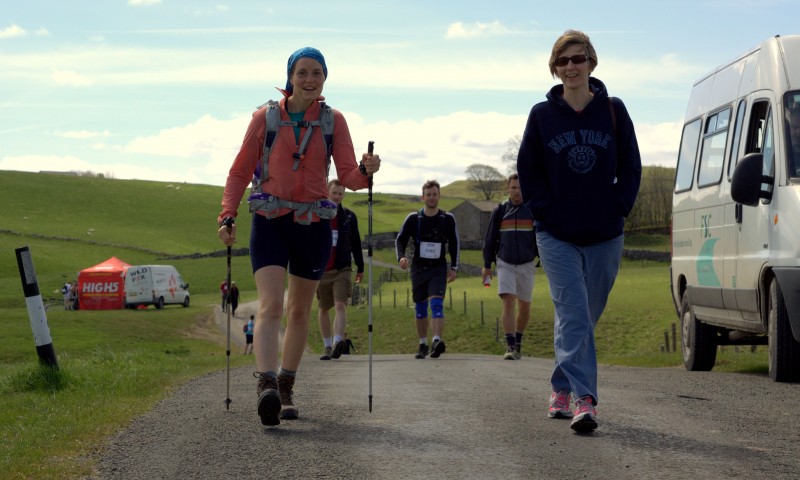 At the top of Fountains Fell we knew that one of the longest climbs was behind us and we began the descent to the road where we sat down and ate, enjoying a late lunch and a welcome visit from our friendly supporters.

The views to Pen-y-ghent were delightful and the descent down to Horton-in-Ribblesdale was made easier in the knowledge that we would soon reach our first major check point at 40km. 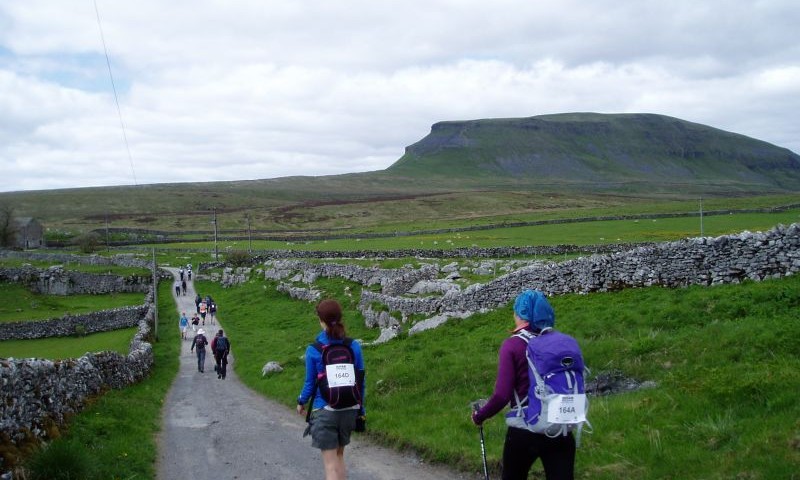 With the full support team there, and a visit from my mum, it was a meeting of the team.  Time for afternoon tea (and a change of socks).  Horton was busy, with a fete taking place in the field next door and a fell race on Pen-y-ghent.  The Dales were alive.

Soon after 4pm we set off on the next leg, following the Pennine Way further in to Three Peaks country where we could delight in the views.  Up on the hillside above Cam Fell we saw Rob, Mum, Annabel and Katie there waiting for us.  To enjoy a chat in the outdoors and encourage us along further.

Across tussocky ground we had now turned a corner, passing the half way point and were about to head south.  Pyschologically this was a great turning point. And then we reached Cam Houses. What an amazing welcome we received from the team of volunteers, and a barn filled with goodies and people bringing us cups of tea.  And can you believe, there was even delicious home baked pizza from a pizza oven!  It was just what we needed.  Walking for so many hours makes you very hungry.  Freshly prepared food was mouthwateringly good.

With such a boost of energy we didn't too much notice or trouble ourselves over the difficult, uneven terrain that followed but were focussed on reaching Oughtershaw, the tarmac road and still delighting in the pizza!  Soon we would be by the familiar River Wharfe, following the river downstream along the Dales Way.

Just as we were approaching the water, we were greeted by two enthusiastic supporters armed with a box of chocolate 'Heroes' for us.  Thanks Rob and Katie!  We were delighted to see them, it really felt like our support team were there every step of the way.  And as if by coincidence when we listened to Katharine's hourly sound track (strictly 'one tune per hour from the ipod...), it was playing "I need a hero".  It kept us smiling....and wonderfully distracted.

Light was fading and we approached Buckden village (the 65km checkpoint) just as it was getting dark.  We treated feet and went inside to the cozy and warm marquee for some hot food and snacks, refuelling for the night hike before us.

A line of head torches and procession of people followed, snaking along the footpath not always taking a straight line.  We rotated the leader of our team, giving time off in between to concentrate on following the footpath ahead.  Hot punch and fruit cocktails at Kettlewell were gratefully received and we continued to Coniston.  It felt a long way but we kept going.

Tired and exhausted we arrived at Coniston, now the real test of Trailtrekker was upon us.  I had to rest and eat plenty of sugary food to boost my blood sugar again which had dropped too low. The Red Cross team were amazing at looking after the many tired and weary walkers reaching this point.

As we left Coniston, we could see the sun was coming up and it was almost like a new walk was beginning. Walking in daylight is so much easier! 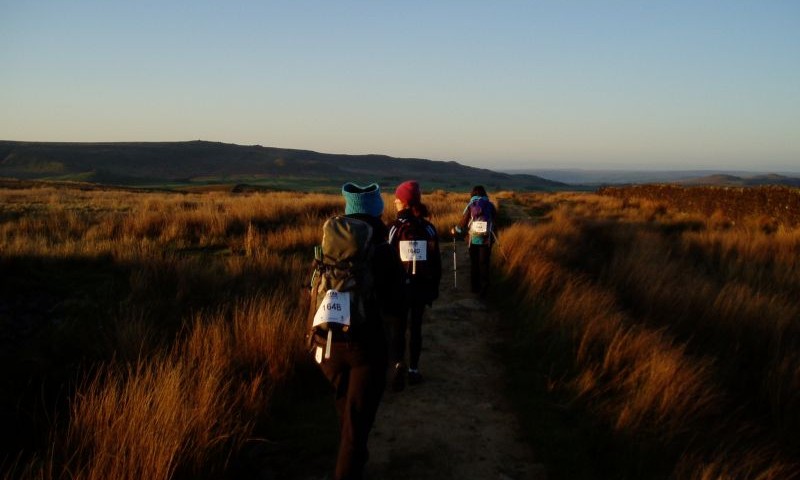 And it wasn't long before we were on the home straight, with a friendly team of supporters at the last water stop in Hetton.

Up through Sharphaw Woods we could see the wonderful views over Yorkshire and Lancashire, looking down to the canal near Gargrave we had been walking on just 24 hours ago. 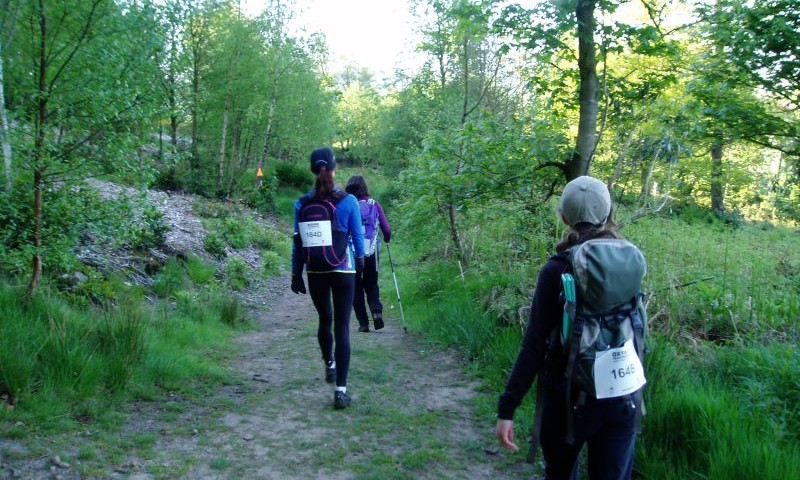 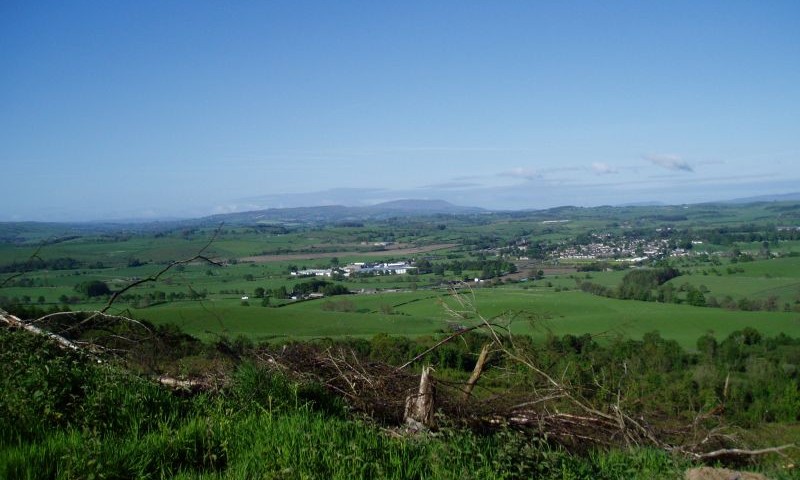 Thankful for the continuing dry weather and bright skies we walked through the fields in to Skipton and down to the park.  I couldn't believe it.  We were nearly there.  We were going to make it.  The emotion was high.

And Katharine played the final song. One that been a surprise for us all. We listened to "Chariots of Fire". Blinking away tears and focusing on getting to the finish line, I turned to the others and said, "So shall we run?". In agreement, we turned the corner past the school and could see the crowds of people gathered. "Let's go", I said. And the four of us ran to the finish line, to a background of applause, and the most incredible relief that we'd done it. We had completed Trailtrekker, the longest walk of our lives. And what fun it had been. 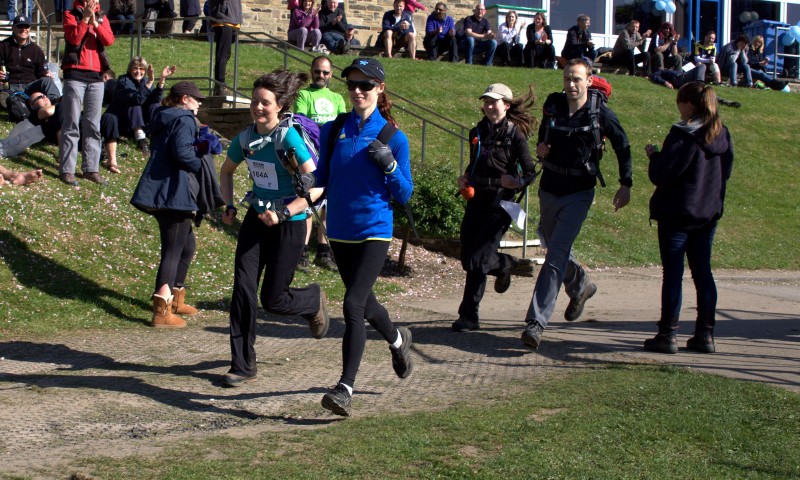 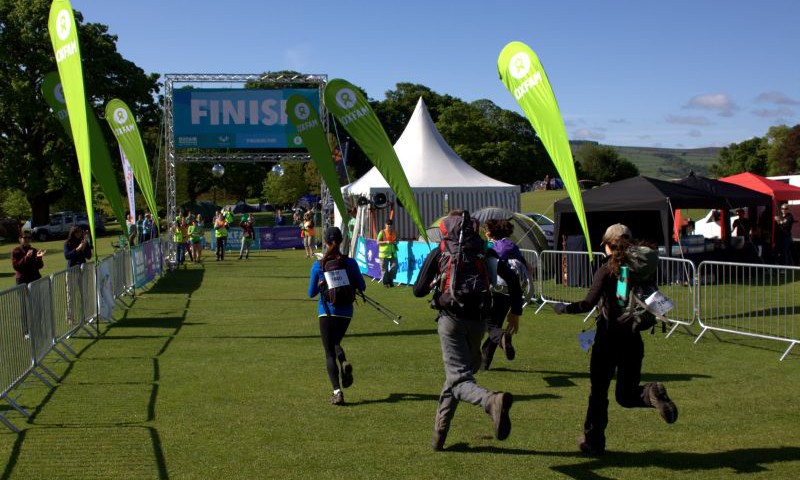 A compulsory photo with our gold medals. 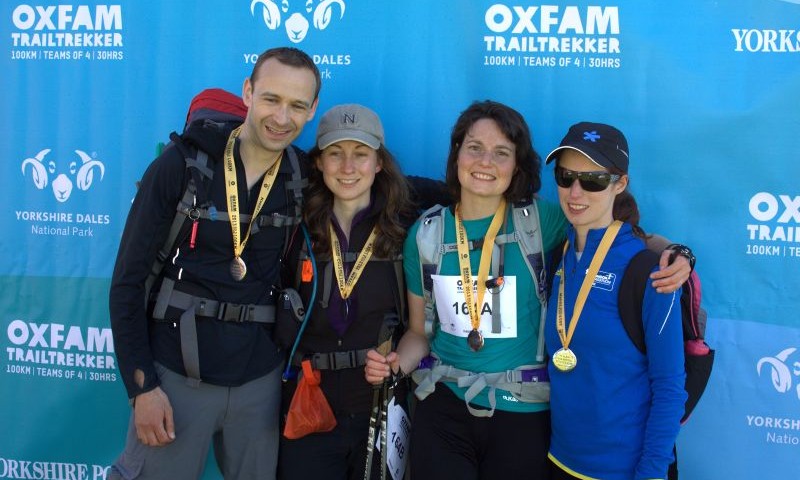 And then to lay on the grass for a moment or two, before tucking in to breakfast in the school hall.

Trailtrekker had been a team adventure for sure.  Our support team were fantastic and there for us throughout.  And together, "The Route Marchers" raised more than £2,000 for Oxfam. 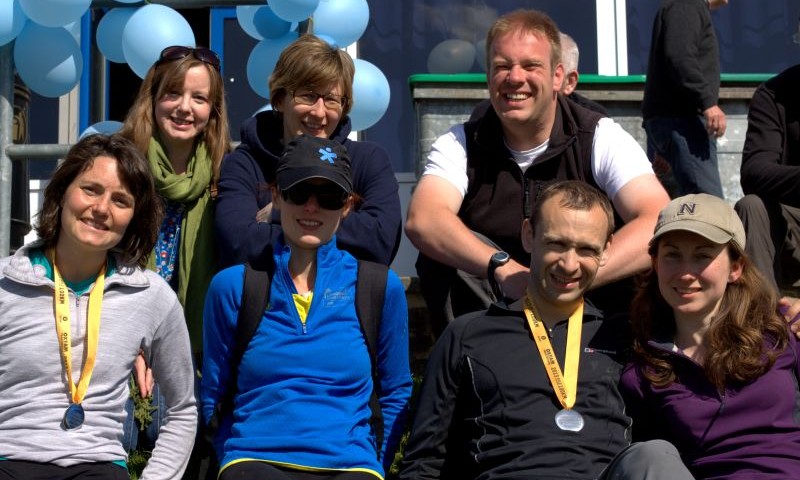 A glorious weekend - and an adventurous few months in preparation - Trailtrekker is something I'll remember, and treasure, for a very long time.